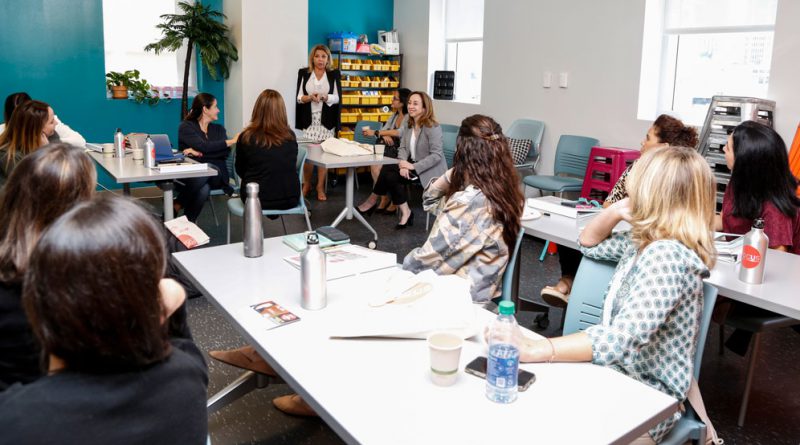 For six months, Yelka Mikolji kept her idea of protecting and identifying endangered species through facial recognition technology a secret.

It wasn’t until several of her friends told her about The Idea Center’s latest venture, a semester-long class for Venezuelan women looking to solidify their business ideas, that she was able to develop her idea.

“It was only the idea, “ said Mikolji, president of Indigo Technologies Inc., a computer technology company based in Miami. “I’m a computer scientist. So I just had to get the problem statement, but the idea was not developed at all.”

Mikolji was one of 20 students who participated in Miami Dade College’s FOCUS: Mujeres Emprendedoras inaugural class. The women graduated on Nov. 26, after developing their business pitches and prototypes for 12 weeks.

FOCUS is a collaboration between the The Idea Center and CISNEROS, an enterprise media group based in Coral Gables. It helps Venezuelan women with local businesses gain confidence in their ideas and build a prototype.

“The point of being an entrepreneur is that you’re resourceful and you create resilience so you can go ahead by yourself,” said Gustavo Grande, director of programs at The Idea Center. “We built momentum in order to get them excited and keep that excitement after the program, but then we’ll let you go and do what you need to do.”

Mikolji was selected out of 200 applicants. The women needed to speak English, have a basic understanding of computer programs, $500 to spend on their business venture and a pitch.

Although there was social media promotion, recruitment was largely driven through word of mouth. Mikolji never thought of attending MDC, but decided to apply after talking with Carolina Pina, program coordinator for FOCUS, at a birthday party and on a WhatsApp group chat.

The program also tapped into several spheres—economic development organizations, nonprofits and chamber of commerce to get the word out.

“We only had a month to recruit and start the program, but luckily, because of our network,” Grande said.

In the first few weeks, the class focused on asking questions that validate whether society will benefit from the products.

“Everything is based around the problem you’re trying to solve,” Mikolji said.

The women also crafted the skills and confidence needed for an entrepreneur in Miami. There was a big emphasis on valuing the growth process over doing a perfect job, which resulted in the students learning to sell to at least 10 customers every week, managing 20 hours of homework and learning in a language that is not their native tongue.

“I think entrepreneurs are very lonely,” Mikolji said. “We’re all from the same country with the same language, with the same problems. You can’t always talk to somebody that understands what you’re going to. We’re all going through the same thing at the same time.”

The group motivated each other to finish assignments via their WhatsApp group chat or providing support during difficult times, like when Mikolji’s cousin was kidnapped in Venezuela.

“[They told me], ‘stay calm, I know this person that can help, let’s publish it on social media,’

[They offered me] resources and perspectives,” Mikolji said.

The transformation process was also very personal. Many of the questions the women heard related to their beliefs about money, what struggles held them back and finding their purpose in life.

“Those are things you don’t think about or talk to people about,” Mikolji said. “We got to really know each other and the essence of who we really were as a group.”

The program began in Venezuela ten years ago, with a focus on bridging the gender equality gap. Women are 29% less likely to achieve economic success in respect to their male counterparts, according to a survey published by the World Economic Forum this year.

However, with the rising number of Venezeulan residents living in Miami due to Nicolás Maduro’s controversial presidency, CISEROS wanted to bring the program here to connect with the business community.

“It’s something that’s very close to my heart because I’m Venezuelan,” Grande said. “I have been wanting to support entrepreneurs from my country. However, because of limitations that can’t go there, I was not able to support.”