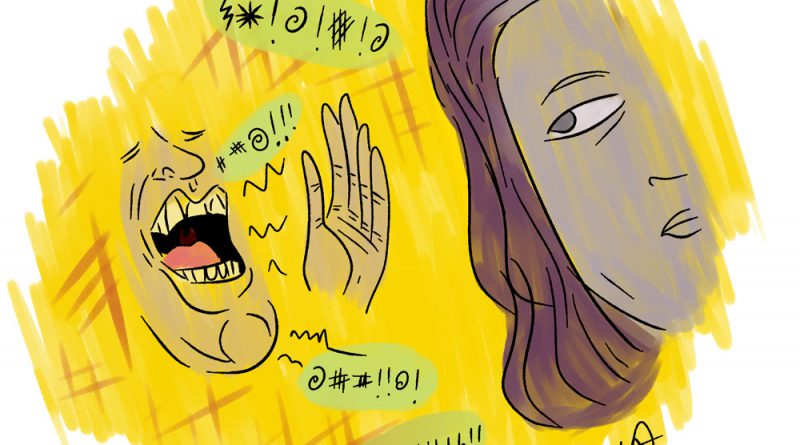 Recently while walking to my car as I left campus, I was catcalled. A man who was driving by looking for a parking spot rolled his window down and whistled at me and told  me I was pretty and made comments about my body that made me uncomfortable. This isn’t the first time it has happened to me and it has happened to many women I know.

Many women are made very uncomfortable by these comments and it has become something called street harassment. There are even social media pages dedicated to retelling these horror stories submitted by not just women, but all people.

The sad reality is that it happens often, and it becomes a scary situation when walking alone. Usually it’ll happen while I’m walking to my car or to a class or even walking into Publix from the parking lot. There was a specific incident when my friend, her boyfriend and I were walking to a 7-Eleven because she lives about a block away. A car slowed down and all of the men in the car were looking at me up and down and proceeded to whistle at me and make comments about my body.

People always ask what I was wearing after I tell that story and my answer is always a hoodie and jeans. My friends and I couldn’t even walk a block without someone being catcalled. It was a scary situation that could’ve escalated and I’m glad it didn’t. Many people have told me I should be grateful for the attention because it’s people telling me I’m attractive or beautiful. However, it’s really just an uncomfortable and scary scenario that in recent times has escalated in many situations.

There have been incidents of women asking men to stop or refusing to give out their number and instead of respecting women, these men have gotten violent and, in some cases, have even ended up murdering women who simply said no. Recently, there was a case in Chicago where a 19-year-old student named Ruth George was killed after ignoring a man who was catcalling her. The man was angry that he was ignored and he then followed her to her car, attacked her, sexually assaulted her and killed her. All she did was ignore him while walking to her car.

This is because of the deeply rooted misogyny in many different cultures. In older times, it was common that catcalls would gain a woman’s attention and be seen as positive, but in modern times, it is viewed as disrespectful and tends to make women very uncomfortable—especially, in this day and age where sex trafficking crimes are more violent and frequent. According to the United Nations, the numbers have increased dramatically since 2010 and have been on the rise ever since, with the majority of victims being women and children.This shift has caused women to walk around very cautiously, especially when they’re alone.

The dangers of women walking down the street don’t revolve around what we wear, how we walk or what our body type is. It comes from men thinking they are complimenting us when in reality, it makes us scared or uncomfortable. The only way to prevent and eventually end catcalling is to educate people on the fact that this habit makes women uncomfortable and just ends up as a mess that doesn’t lead to either party getting what they want. Catcalling just makes men seem gross and unattractive as opposed to someone coming up to you and starting a regular conversation.