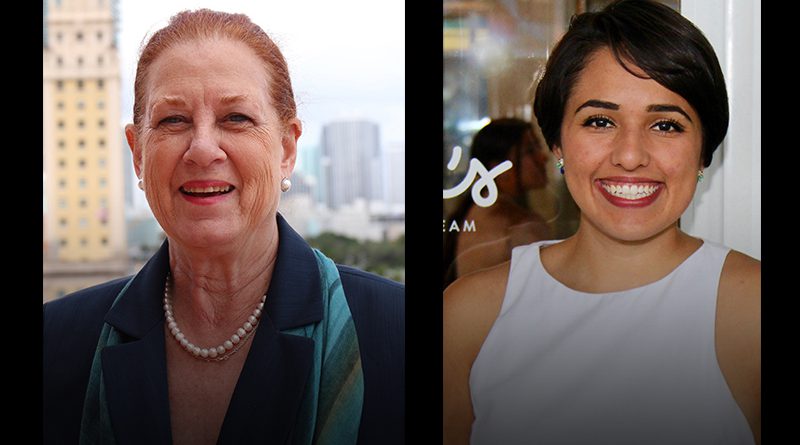 In The Running: Pictured from left to right: Esther "Shelly" Smith Fano and Luisa Santos. Both are running for the District 9 seat on the nine-seat Miami-Dade County School Board.
News
January 24, 2020August 11, 2020 Heidi Perez campaign, Elections, school board

Two candidates gunning for a seat on Miami-Dade County’s School Board have close ties to  Miami Dade College.

Luisa Santos, who graduated from The Honors College at Kendall Campus in 2012, and Esther “Shelly” Smith Fano, the executive director of MDC’s Hospitality Institute—are two of the four candidates running for the District 9 spot on the nine-seat School Board.

“I am very glad that two candidates associated to [MDC] are running for District 9 representation at the [School Board],” said Interim College President Rolando Montoya. “If any of the two are elected, MDC will benefit from additional connections to the local public school system.”

Fano, 69, announced her campaign on Jan. 17 through a press release, and hopes to be a voice for underrepresented communities.

“It’s something I’ve always been interested in,” Fano said. “We need to listen more to the students, teachers and educators.”

Santos, who founded Lulu’s Nitrogen Ice Cream in Edgewater, launched her campaign in November through a campaign video. As the youngest candidate, the 29-year-old hopes to give back to the school system that supported her as an undocumented Colombian immigrant.

“I didn’t just wake up and say, “‘Oh I want to run for office,’” Santos said. “This is my home. There’s a seat that represents my home. I see how I can add value and serve my community.”

The district, which represents the southernmost part of Miami-Dade County, represents schools within municipalities inside Pinecrest, Cutler Bay, Homestead and Florida City. Lawrence S. Feldman, who has represented the district for nearly a decade, announced he would not seek reelection last July.

The other two candidates are Justin Koren, the assistant principal at Miami Killian Senior High School, and Nancy Lawther, a university professor and former president of the Miami-Dade County Council PTA/PTSA. The latter garnered Feldman’s support.

The seat is up for grabs until November when their names appear on the 2020 election ballot.

Fano is no stranger to Miami-Dade County Public Schools.

She’s advised Miami-Dade County Public Schools Academy of Hospitality and Tourism Board since 2002, and helped design curriculum and coordinate internships for high school students interested in hospitality and business.

Fano, who received an associates degree in business from MDC, has led The Hospitality Institute at Wolfson Campus since 2008. As executive director, she has secured funding, instituted certificate and training hospitality programs and helped students find jobs in the area.

“She believes that governmental authorities are to work to make individuals stronger,” Montoya said. “Her efforts are not to make the government big and strong, but to promote the well-being of individuals and families in a free enterprise system.”

Colleagues say Fano’s friendliness, knowledge of the hospitality industry and patience to her projects have helped secure funding and established programs for the Institute.

“Shelly’s expertise and wisdom have been invaluable to putting together the program,” said Ana Martinez, assistant vice president of development for MDC’s Foundation. “It’s obvious she does her homework, from her depth of experience and knowledge.”

Fano hopes to be a voice for underrepresented communities in District 9—the district where she’s served as a teacher and her two children, former Lieutenant Governor of Florida Carlos Lopez-Cantera and Teal founder Dave Fano, went to school.

She plans to do this through listening sessions between students, educators and parents in the district to configure solutions.

To Santos, representing District 9 means fighting for students—ones that walk the same halls she did as a student at Coral Reef High School.

Some of her campaign initiatives include mental health services for students, better wages for educators and creating better support systems within classrooms.

Santos emigrated to Miami from Colombia when she was 8. She earned her associate’s degree in international relations from Kendall Campus in 2012 before transferring to Georgetown University and earning a bachelor’s degree in political economics with a minor in education.

In 2014, the 29-year-old founded Lulu’s Nitrogen Ice Cream. But she has remained passionate about education and received an endorsement from former MDC President Eduardo J. Padrón.

Santos is a staunch Democrat, and not afraid to show it. In 2016, she appeared in a campaign ad for Hillary Clinton’s 2016 presidential run, and hosted phone banks for Andrew Gillum’s 2018 gubernatorial campaign run.

But since the District 9 seat is non-partisan, Santos feels her outspoken political views won’t be an issue.

“I think education is the perfect place to not include politics,” Santos said. “There’s so much agreement. Who can argue that students need a solid education?” 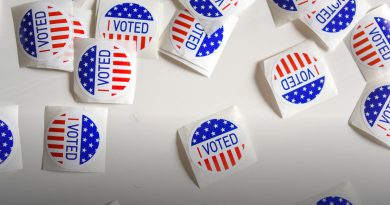 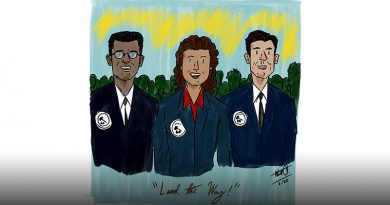