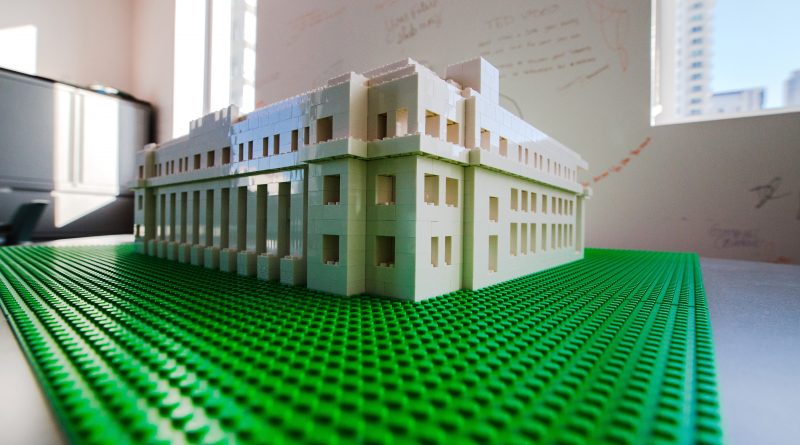 This semester, 14 Wolfson Campus students will recreate all 10 buildings at the campus using Legos. The not-for-credit Miami Lego Model project will place at the Makers Lab, located in Room 1164.

The project is meant to help the students study the growing and changing urban landscape. It is an offshoot of professor-in-residence Ramiro Almeida’s Creativity, Innovation and Human-Centered Design course taught in the Innovation Lab at the Idea Center.

“It’s a good way to make guesses and hypotheses, making changes to the model to see potential changes in the city, whether it be sea level rise, traffic flow, events that happen or changes in infrastructure,”  said Alban Allajbegu, a 19-year-old engineering major at Wolfson Campus. “It serves the purpose of seeing the changes that can happen in the city on a small scale using the model.”

For Allajbegu, the project brought back childhood memories of building with the plastic linking blocks. His involvement in the project and his hours spent with Almeida led him to leave Miami Dade College this semester to observe a robotics class at the Massachusetts Institute of Technology.

Anthony Ordoñez, an 18-year-old mechanical and aerospace engineering double major, joins Allajbegu at the top technological university with two other students. There, they will work on building self-driving cars. Both served as student leads last semester. Allajbegu was also a research assistant who began this project by researching the area around Wolfson Campus and most of downtown Miami.

The project may appear playful, but it requires serious planning. The team defines and designs the part of the city they will work on by preparing images and dimensions. Afterwards, the team draws up—with a pencil, paper and a ruler—their own blueprints, and builds it to a certain scale. For example, the prototype for the Freedom Tower was one foot to every 114 feet.

Almeida said it will take a million Legos for  the team to build a scale model of the Wolfson Campus and a portion of downtown Miami.

Almeida taught at MIT from 2013 to 2015 and conducted research on innovation at the MIT Media Lab. He taught at Harvard University from 2012 to 2013, where he received the Harvard Loeb Fellowship from the Graduate School of Design and was part of the Harvard Innovation Lab in 2013. Almeida is part of a group of MIT startup companies called Startup Exchange 25 and founded the company Optimus Ride in 2014, which is working on designing self-driving cars.

While at MIT, he spearheaded a similar Lego building project that originally started as an urban tool to help researchers study how bus-rapid transit systems affect the city that led him and his team to build Boston’s Dudley Square with the same plastic building blocks. He started teaching at MDC in the fall of 2015.

Almeida decided to bring the Lego project here to help students think outside the box by using unorthodox objects to create or solve problems. First funded by the MDC School of Business, the project consisting of two phases started last summer. The first phase, modeling all 10 buildings of Wolfson Campus, should be completed by April 7 in time for the Miami Maker Faire, a science fair/county fair hosted by the campus where inventors, artists, innovators and crafters will gather to show what they have made throughout the year.

Two months ago, the project received a grant that will run through Dec. 8, 2017 from the Institute of Electrical and Electronics Engineers to further scientific and education purposes of innovative technology. The plastic bricks are bought directly from the Lego company’s ‘Pick-A-Brick’ tab on their website.

“Legos are one of the most accessible, easy to understand building tools ever created. That’s why we use them,” Almeida said.

The first building mapped and constructed was the Freedom Tower, which took about 5,000 white Lego pieces to complete. The Dade County Courthouse also took close to 8,000 pieces, and the David W. Dyer Federal Building and Courthouse took about 6,000 pieces. All buildings will use legos on the inside as well.

“We started with the Freedom Tower because it is the building that represents Miami Dade College and serves as a monument to the Miami Dade College community,” said Jeremiah Rivera, a Wolfson Campus Honors College student of graphic design, who has served as the student lead on the Miami Lego Model since last fall.

According to Almeida, the time spent on a building can vary from one to three weeks, depending on the complexity. The first 10,000 white pieces ranged from small sizes like one-by-one bricks to larger two-by-five bricks. The models sit on 32-by-32 Lego units green base plates. Almeida hopes to add another level to the project that will include images and videos projected onto the buildings to simulate cases of self-driving cars in downtown Miami.

The second phase will include creating the iconic and relevant structures in the City of Miami. Almeida plans to exhibit the model as part of Art Basel before it goes into a permanent viewing collection.

“Sometimes it’s easy to forget that simple objects can come together to make something complex, and that’s the idea of what the Miami Lego Model is about,” Allajbegu said. 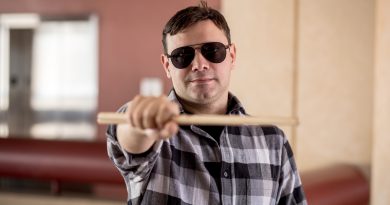