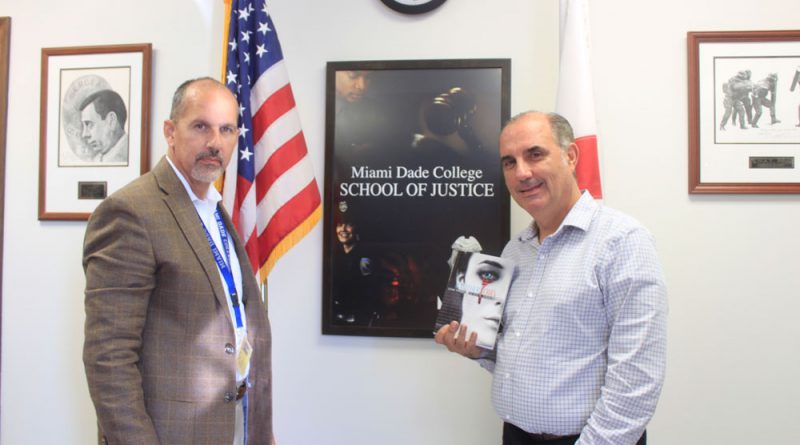 Written by Kendall Campus criminal justice professor Shawn Schwaner and Dean of the School of Justice, Public Safety, Law Studies Raimundo Socorro, the book was published by Kendall Hunt Publishing Company. It features a mixture of Schwaner’s autobiographical stories of abuse and hopelessness and Socorro’s understanding of criminal justice policy.

“[The book] is very dark at times, but it has policy implications based on real world experience, real theory and real data,” Schwaner said. “My perspective is different than standard academics because I lived through it.”

Currently, the book isn’t being used in the classroom but a chapter served as review material for a professional development law enforcement course at Miami Dade College. A modified second edition will include a broader range of criminal justice policy and will be available as a hardcover.

The book is the third installment of Mother Cries, an ongoing novel series by Schwaner,  who began at the College seven years ago. In the book, Schwaner uses his personal encounters with murder and suicide as a tool to explain the theory behind criminal justice policies and regulations.

Born in Toledo, Ohio, Shawner was raised by a poor pregnant mother who faced hardships until she met Bertha Lee Green, also known as Mama Green. She helped Schwaner’s mother get her own apartment and raised him because his mother was often working.

Schwaner credits Mama Green for being a source of strength in his life. She’s the inspiration behind the series.

In the book, he discusses the intricacies of his personal life, such as domestic abuse and his mother’s experiences.

“I was torn between the worlds of the inner city and academic achievement,” Schwaner said. “The book grabs that, and I take all those [personal experiences] and bring theory and data into it.”

Schwaner began writing the book in June, and in three weeks, it was finished. He contacted the people that were mentioned in the chapters to confirm the veracity of the tales. They were often surprised at his sharp memory, according to Schwaner.

“I wanted to be brutal and honest to show that violence is real, so that we can talk about real solutions,” Schwarner said.

Socorro, who began at the College in 2013 and formerly worked as a police officer for the City of Miami for 26 years, shifts the textbook’s conversation in two chapters to discuss policy changes within the criminal justice system. The entries began as academic research that fit into Schwaner’s textbook curriculum.

“The connection between the community and the law enforcement is fractured and I soon realized that I had once been part of the problem, now I want to be a part of the solution,” Socorro said.

Schwaner hopes students connect to his personal accounts of life.

An electronic version of the textbook is available for $50 at he.kendallhunt.com/product/mother-cries-lethal-violence-real-zombie-apocalypse-0