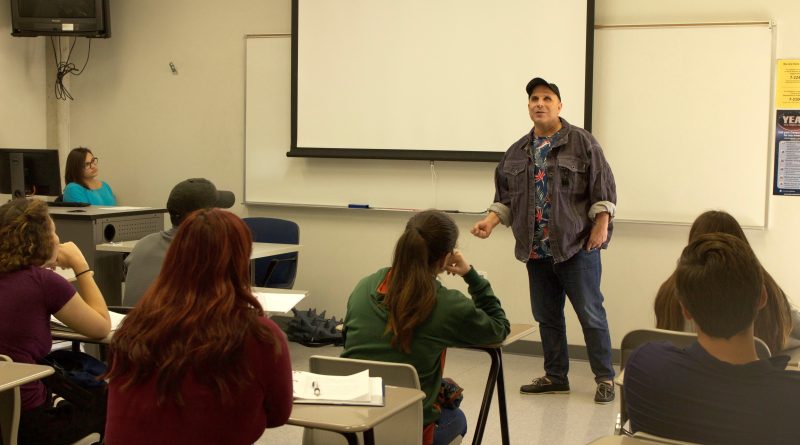 Second Chance: English professor Manuel Duasso has been blind since an accident that occured in 1985. He stands i front of one of his classes at Kendall Campus discussing the role of women during World War II.
JAYNELL PERERA \ THE REPORTER
News
February 10, 2017 Ciro Salcedo

Professor Manuel Duasso stands in front of his English Composition class and leads a lively discussion on gender roles in World War II.

The mellow piano music that plays in the background is one of many aspects that sets his classroom apart. The other—that Duasso is blind.

Duasso has been blind since an incident in 1985, when he was jogging and the then 23-year-old middle school teacher was shot in the head during a robbery. The bullet entered Duasso’s left temple, severed the optic nerve, and exited through his right eye.

He struggled to find work for years, but was able to earn his master’s and doctorate degrees in international education from Florida International University.

Duasso was unemployed until 1993, when he  hired by Miami Dade College to work as an English professor at InterAmerican Campus.

“I was on total welfare. From medicare and social security disability checks, and food stamps,” Duasso said. “In fact, I was at the welfare office when I called home and heard that I had gotten the job at MDC 24 years ago.”

Going back to teaching had its challenges.

“It was scary to walk into a black class,” Duasso said. “The only connection you have are the voices of others and what they want you to hear of themselves.”

In order to not grow bitter and destructive, Duasso let go of what happened. He does not dwell on what would have been if his sight was not taken.

Duasso manages his classes with the help of his assistant and former student Connie Giffuni. She helps him navigate around campus. Her job includes reading things to Duasso, guiding him to his classes and helping him grade papers.

“It’s a different perspective [working for him],” said the 23-year-old, who graduated with an English bachelor’s degree from Florida International University and attributes him for inspiring her to pursue her degree. “I was his student and now I’m his assistant.”

Duasso dresses on his own. He picks his clothes out by texture. He feels the denim of the jacket and the stripes on his blue shirt.

“If I don’t have a plan, everything becomes messy,” he said.

Getting to work proves a challenge, but he finds a way.

“It’s the worst, but I do try and get a ride from my sons or neighbors,” he said.

In the more than 30 years since the incident, Duasso has found peace with his attacker.

“A few years after his sentence he sent me a letter asking forgiveness,” said Duasso who does not keep tabs on where his attacker is. “I forgave him. I did it partially to psychologically do the right thing.”

Duasso feels that his success in life and recovery comes from a higher power.

Duasso is seen as an inspiration by his students and faculty at the College.

Michael Vensel, the English and communications chairperson at Kendall Campus, describes him as “hard working, caring, always there for his students.”

That is a sentiment shared by 19-year old Carlos Agudelo, an international relations major who is enrolled in his ENC 1102 class.

“He’s living proof of discipline and passion,” Agudelo said. “College life is not only about knowledge but about experiences and memories, and his class offers that, an incredible memory.”

Duasso, who is married, met his wife Ciri Diaz at Westchester Christian church in 1986, a year after he lost his sight. He thinks of his marriage as a partnership with effective teamwork.

“There are people that are my friends, that can never get through me being blind. Everything about me is ‘Manny, blind’ and then everything else. Everything is blind,” Duasso said. “My wife didn’t see that, you know? It was ‘Manny, creative and energetic.’”

During his time away from the classroom, Duasso enjoys life in Miami.

“I love the beach in the summer. I love the Everglades in the winter,” he said. “I love art. I love it when people describe colors and shapes. My wife described some really beautiful paintings.“

“If you’re engaging, they don’t notice being blind,” Duasso said. “I never flat-out say it, because I don’t want to scare any new students. I try to build a bond with them and tell them what happened.”