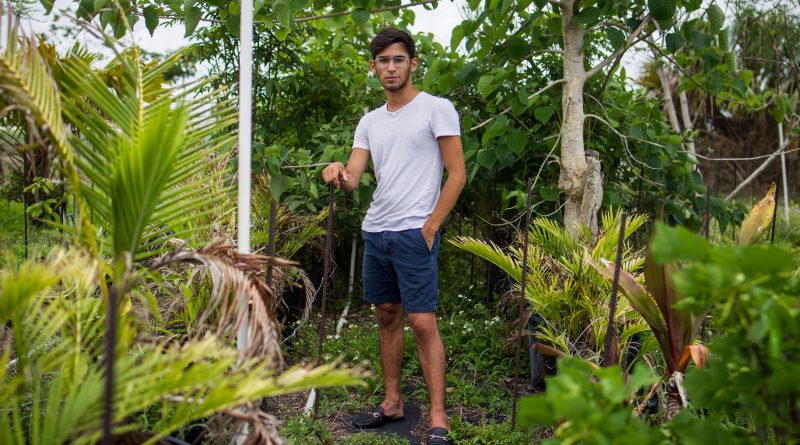 All The Buzz: Christian Acevedo, an environmental science major at North Campus, is building bee hives behind the Science Complex at North Campus to bring awareness to the impact bees have on the environment.
SEBASTIÁN BALLESTAS / THE REPORTER
News
May 18, 2018July 5, 2018 Christian Ortega

Through the efforts of Christian Acevedo, an environmental science major at North Campus, the local nonprofit Public Hives and North Campus, beehives will be featured behind the Science Complex starting in June.

With hives on campus, Acevedo hopes to bring awareness to the ever-decreasing local bee population, increase nearby pollination and educate about the impact bees have on the environment.

“I wanted to do this project to leave an impact on the campus,” Acevedo said. “The moment I got on campus, I knew this was going to be my mission.”

Acevedo initially heard about Public Hives through Sam Van Leer of the Urban Paradise Guild who then got him in contact with Danielle Bender, founder of Public Hives.

Public Hives is a nonprofit organization founded in April  2017 in an effort to get beehives in public areas to educate the public about bees and their roles in the ecosystem. They have hives in Little River, Allapattah, and Opa-Locka. Public Hives holds weekly workshops that occasionally allow attendees to build their own hives for native bee species.

After visiting the hives that had already been set up in Little Haiti in November, Acevedo “immediately fell in love.”

“He’s been so involved and engaged and has really been pushing for a location at Miami Dade College,” Bender said. “He has done everything he can to spearhead this project and take charge of getting hives placed in Miami Dade College.”

Once the hive is built, Acevedo will lead teaching sessions about beekeeping for community members and students.

“This is an excellent opportunity for him because he’s so civically minded and also it allows him to take on a great leadership role in his community,” Bender said.

When Acevedo got in contact with Bender, his next step was getting permission to build the hives at North Campus which, according to Acevedo, went without a hitch.

“Everyone was excited to be a part of this,” Acevedo said.

The largest concern was making sure the hives were insured to avoid liability. Through his experience working with Public Hives, he was able to quickly file all the paperwork necessary.

The next step in the process is planting native flowers in order to attract native bee species.

Once the flowers have been in place for at least two weeks, the hives will be built. Acevedo is aiming for mid-June. There will be two types of hives built: one for honey bees, which prefer to live in colonies, and another for native bees that don’t produce honey and are solitary.

After setting the hives up, they will be available for the public to visit. Acevedo wants to use this opportunity to educate those who are curious and help erase the stigma bees have.

The hives will be equipped with beekeeping suits that fit children and adults of all sizes along with EpiPens for those who may have an allergic reaction.

But Acevedo still urges those who are new to the hobby to handle bees with care, as they can be delicate creatures.

Though the native bee hives won’t produce honey, Acevedo hopes to subsidize the hives by selling the honey the other bees produce.

As the overseer of the hives at North Campus, Acevedo is charged with mentoring the next generation of students who are interested in beekeeping. He also hopes to expand the hives to other campuses.