The ball didn’t bounce the right way for the men’s and women’s basketball teams this year as both squads failed to qualify for the state tournament.

The men’s team finished with a 16-15 record while the Lady Sharks posted an 18-12 mark. Both team’s playoff hopes were dashed due to mediocre conference records, which determine state tournament seedings. The Lady Sharks were 8-7 in Southern Conference play; the men’s team was 6-9.

Despite the disappointments, both teams took some positives away from the season.

The men’s team finished with a record over .500 for the third straight season, a feat which they hadn’t achieved since the ’06-’09 seasons. The Lady Sharks 18 wins allowed them to have their first winning record in four years.

Head men’s basketball coach Stephen Cowherd believes the Sharks would have faired better on the court had they not lost guard Jemar Perkins to a season-ending injury during the preseason.

“It’s not an excuse as to why this season ended like it did but he was a big part of the team,” Cowherd said. “He was our best defender, best guy to get in the lane on offense and our toughest player.”

Inconsistency and closing out games were other key issues this season for the men’s team.

“We had four double-digit leads at the end of the first half that ended with us losing all four [games], it’s tough not being the tough team anymore,” Cowherd said.

For the women’s team, the main concerns revolved around chemistry and defense.

“[Defense] is kind of what we struggled with this season,” said Jaiveonna Norris, one of the standout players. “On-ball [defense], allowing people to get inside the paint, people not rotating, those were one of the things we struggled with and that is how they got a lot of easy layups.”

Sophomore guard Nachalie Dejesus led the team in scoring with a  21.8 scoring average. She added 8.1 rebounds per game. Freshman forward Emporess James led the  team with 12.6 rebounds per game while averaging 11.2 points. 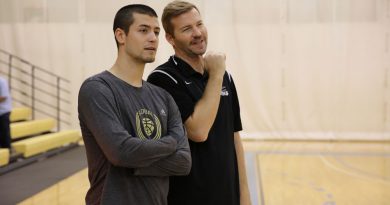