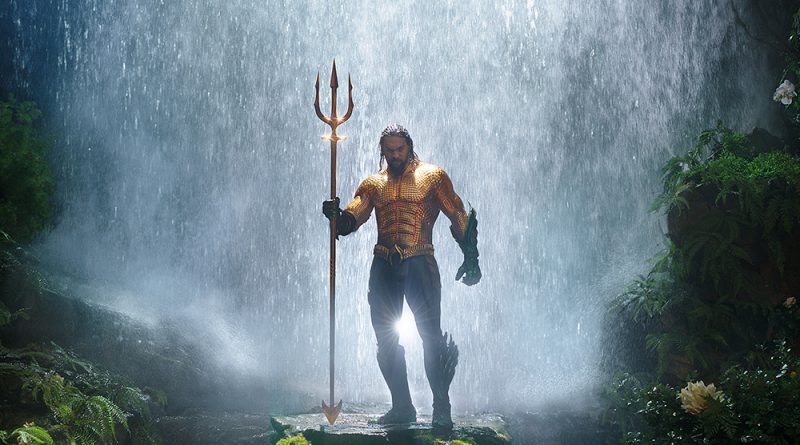 Golden Star: Jason Momoa stars as Aquaman, shifting the character from the punchline of jokes to the one cracking them.
PHOTO COURTESY OF WARNER BROS.
A&E
January 11, 2019 Dante Nahai

In any type of comic book media, there is always a misconception about Aquaman. He was the butt of every super hero joke, those jokes mainly repeating the same pattern that Aquaman is “lame” and he can talk to fish.

As someone who has read his comics in the past and watched the movie, I can say those are all false.

The latest film in the DC Universe, directed by James Wan, shows that Aquaman is more than just a fish boy. Starring Jason Momoa as Arthur Curry, the hero’s full name, we see a much more accurate depiction than most adaptations. Of course, Momoa’s Aquaman seems more metal than the comic book one—always seen drinking a beer and having fun in the face of danger.

But the movie doesn’t just tell the story of Aquaman. His cast of characters have a big role in the film.

The film introduces Mera, played by Amber Heard, his main love interest both in comics and movies and a character originally introduced in 2016’s polarizing Justice League. Her story was changed from her first comic appearance, where she was sent from another kingdom to kill Arthur. In the film, however, she comes to him asking for help.

His half-brother, Orm Marius, is played by Patrick Wilson. In the film, he is trying to rule over all the hidden societies in the ocean. Mera is also forced to marry Marius, requiring Arthur’s assistance to save her and, therefore, save Atlantis.

While watching Aquaman, I was very happy with what I saw. The action scenes’ choreography was well executed, with interesting camera movements throughout that gave a heightened sense of thrill.

Another positive aspect were the effects of the film. Some people try to argue with films like these, with the most common complaint being too much CGI, but how else are you supposed to make a film where half of it takes place underwater? Besides that, the effects were fluid, with some minor issues that are only noticeable if you try and look for them.

One recurring theme in comic book films like this is comedy. Comedy can either ruin the momentum of scenes, or sometimes there isn’t enough. Aquaman struck a good balance between seriousness and comedy, with the jokes not being forced or ruining the meaning of scenes.

Unlike other comic book films, Aquaman is a breath of fresh air. It shows audiences and comic book fans alike who Aquaman truly is.