When Richard Milstein was a student at Miami Dade College in the early sixties, he could not admit that he was gay. According to Milstein, slurs like fag and queer kept him closeted until the age of 42.

“If we had role models like those that young people have today, it would have been easier to come out,” said Milstein, a Miami-based attorney and one of the dozen plaintiffs in the case that challenged Florida’s refusal to recognize same-sex marriages performed in states with marriage equality. “Now, firefighters, lawyers, and police officers are openly gay and set an example for the young, struggling to come out.”

Milstein made those comments at the Miami Beach Botanical Garden on Jan. 6, the day after same-sex marriage became legal, at a renewal of vows ceremony for gay couples who had married in other states. Milstein stood alongside his long-time partner Eric Hankin in cream colored suits with orange ties and kippot, a Jewish religious head covering. They were joined with dozens of other same-sex and hetrosexual couples while Miami Beach Mayor Philip Levine officiated while clergy from three different traditions injected spirituality into the ceremony, blessing the couples. A crush of media recorded the event that was as much a celebration of love as a political event.

Milstein is an MDC class of 1966 alumni and an attorney who practices high conflict, complex and high-profile guardianship, trust, probate matters and family law as well as mediation.

Following an Aug. 21 ruling by U.S District Judge Robert Hinkle, the ban on same-sex marriage came to an end in the state of Florida. Hinkle found the marriage ban to be unconstitutional in two instances. One being, a case brought up by the American Civil Liberties Union (ACLU) of Florida on behalf of eight married same-sex couples including Milstein, a Fort Myers widow, and SAVE, South Florida’s largest LGBT rights organization.

Due to the expiration of a stay on a federal ruling which considered Florida’s same-sex marriage ban unconstitutional, official same-sex marriages and recognitions from marriages in other states began on Jan. 5 in Miami-Dade County.

The case still continues in the 11th Circuit Court of Appeals due to Attorney general Pam Bondi’s appeal of Judge Hinkle’s ruling.  There is not a set date for a hearing in the appeal by the Attorney General.

That challenge, existing homophobia and opposition toward same-sex couples, did not dampen the mood at the Miami Beach Botanical Garden vow renewal event which was marked by all the trappings of traditional nuptials—hugs, flowers, children running around, guests mingling in the back— and the glare of a horde of photographers shining spotlights on the couples.

As they recited their vows the crowd cheered. Many in the throng shed tears.

“I thought the ceremony was awesome,” said Michael Quimby, a computer information technology major at Wolfson Campus and singer with the Gay Men’s Chorus which kicked off the ceremony. “Love knows no gender.”

“I cried,” Rosenfeld said. “It was very emotional. I was very happy.”

Rosenfeld recalled how he had been teased in school for “acting gay” and the difficult feelings of otherness. Now, he is a part of the Gay Straight Alliance at his high school raising awareness of the difficulties for LGBTQ youth and creating a welcoming environment.

For Rosenfeld, gay marriage in Florida gives young gay people like him hope.

“That people could be together for twenty years and then marry now is astounding,” Rosenfeld said. “You don’t feel less than others because of who you are. It creates more equality.”

Milstein understands that there are still pressures today for gay students at MDC to conform. 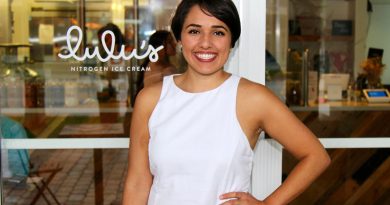